A.M is a patient who received a treatment six days ago for reflux and constipation. During that session I had treated several points in the lower limbs, including an-la-ta 2 left.  The patient reported that instead of continuing FM therapy she took medication (omeprazole) and developed redness and swelling in the anterior lateral ankle making walking difficult and causing her to limp.

I decided to see her the next day suspecting phlebitis. On ultrasound the vessels appeared normal, but there was lymphedema in the subcutis. The swollen, red region was not related to the course of the saphenous vein. The skin was warm on palpation. I hypothesized an “iatrogenic” algodystrophy (complex regional pain syndrome) due to increased compression of the superficial fibular nerve arising from a post-treatment inflammatory reaction.

With the second treatment I proceed to the thermoregulatory skin system.

The affected region was q-an-la-ta1,2. I start palpation at the hinge point of an-la-cx, which was not very densified, as well as an-me-cx. Re-la-cx appeared slightly altered, but the pv was more so. I treat the point and immediately afterwards the redness decreased, as did the pain on palpation. I completed the treatment with la-ta as an-la-ta had already been treated in the previous session. Eventually the swelling disappeared and the patient no longer reported pain either at rest or upon walking. I completed the treatment with the contralateral PV to rebalance everything. 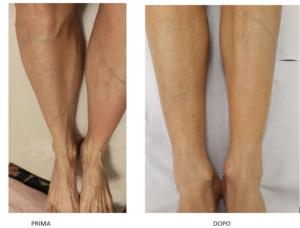